Gay Hendricks has been a leader in the fields of relationship and body-mind transformation for more than 45 years and has written more than 40 books, including bestsellers such as Five Wishes, The Big Leap. He joins us on this week's show to give exclusive insights on his brand new book, Conscious Luck, to share secrets to creating your own luck, and to expand on his Zone of Genius research by introducing a whole new layer to his groundbreaking discovery, the Genius Spiral.

Openness to Discovery Scale [Free Download]: Are you willing to shift from focusing on "what's wrong?" and using your interactions to continue to improve yourself? This handout is designed to accompany you on the journey to connecting deeply with yourself and focusing on discovery so that you can continue to expand into deep presence, expanded connection with the world and more genuine play.

Genius Spiral [Free Download]: This new layer to the Zone of Genius provides an even more powerful guide to your transformation and living primarily in your genius. 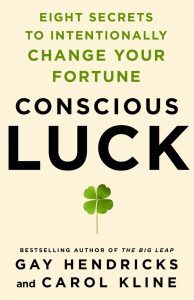 HIGHLIGHTS FROM THIS EPISODE

Gay Hendricks Biography Gay Hendricks has been a leader in the fields of relationship transformation and body-mind transformation for more than 45 years. After earning his Ph.D. from Stanford in 1974, Gay served as Professor of Counseling Psychology at the University of Colorado for 21 years. He has written more than 40 books, including bestsellers such as Five Wishes, The Big Leap, Conscious Loving and Conscious Loving Ever After, (the last two co-authored with his co-author and mate for more than 35 years, Dr. Kathlyn Hendricks).

He is also a mystery novelist, with a series of five books featuring the Tibetan-Buddhist private detective, Tenzing Norbu, as well as a new mystery series featuring a Victorian-era London detective, Sir Errol Hyde.

His last book, The Joy of Genius, shows how to eliminate negative thinking and bring forth true creativity.

Gay has appeared on more than 500 radio and television shows, including Oprah, CNN, CNBC, 48 HOURS and others.

Are you subscribed to the show?

If you’re not, be sure and do that today. I don’t want you to miss an episode or bonus, and if you aren't subscribed, there’s a good chance you’ll miss out on those. Click here to subscribe in iTunes!

It would also really help me out if you would take a minute to leave a rating and review over on iTunes, so I can broaden my reach and my ability to help others. It's really easy too! Just click here to review, select “Ratings and Reviews” and “Write a Review” and let me know what your favorite topic we cover is, and what your favorite part of the show is. I'd love your feedback on topics you're interested in for future episodes, and love hearing your overall thoughts on the show. Thank you!

LINKS & MORE MENTIONED IN THIS EPISODE:

Keep Up-to-Date with the Latest Episodes:

#66: The Number One Way to Shift You and Your Team Out of Drama

#65: How to Champion a High-Performance Team with Anjani Bhargava, Partner in Evolution